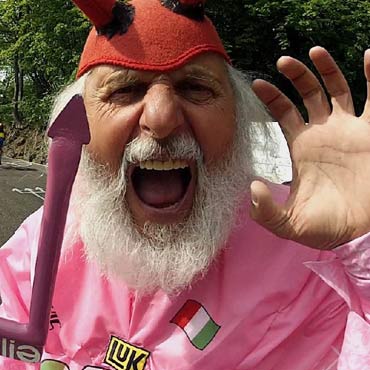 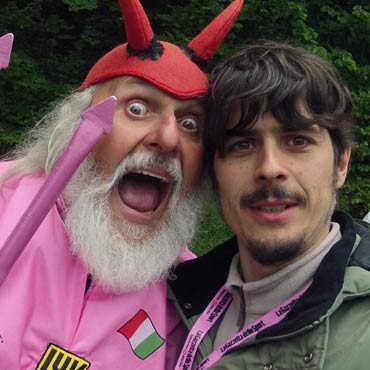 "El Diablo" is a spin-off from the feature-length bike movie "The Last Kilometer".
Contrary to what you may have heard on the street, the devil wears pink, not Prada. The 7-minute film from Paolo Casalis—a cinematic extension of his full-length film, “The Last Kilometer,” is a glimpse into the personality of Dieter “Didi” Senft, or as he is better known in European cycling circles, “El Diablo.” The Italian-language short follows Senft, who is the exemplification of a cycling fanatic, clad in pink racing gear, sporting a crown of devil horns atop his head while yielding a trident in his hand, who cheers on the cyclists during the Giro d’Italia race—one of the premier cycling events in Europe that include the Tour de France and Vuelta a España. Cheering is a bit of an understatement, however, as Senft hollers at the cyclists while chasing after them, wildly waving his trident in the air. The film is a strange, yet entertaining, romp through the mind of a true cycling aficionado.

If you like this, take a look at the feature length film "The Last Kilometer"